I have been thinking a lot lately about my Uncle Ray. Surrounded right now by small backyard farms and gardens, my thoughts have gone to the time when I was a child living with my grandparents and my aunts and uncles. There was one uncle in particular that comes into my thoughts these days and that is my Uncle Ray. I believed he lived only to mingle with nature. On any given day he could be seen in the garden tending his exotic chickens, fancy pheasants, quail, and game birds of all sizes, shapes and colors. Growing up I always had a goat, rabbits or some animal to call my pet for while. I was on the back of a pony before I could walk. It was a small plot of land but filled to the brim with growing vegetables and funky looking fowl. 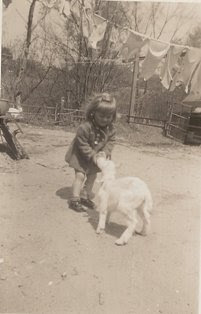 My mother being only 15 years old when I was born added to the magic of my childhood by making me the youngest in this close knit family. My grandparents had more time to give to me so I heard all the stories and family history they dared tell. I remember Ray going off at night with his gang of buddies… coon dogs howling in the distance. Course if they were lucky and the dogs chased a raccoon into a tree he would always make sure there wasn’t a den of babies nearby and if by chance they took a parent away from the young he would bring the young home to my grandmother and she would nurse them day and night to keep them alive then he would set them free.
Ray was the oldest boy and the only one that seemed to know of the family’s Native American connection. If there ever was a trapper trader reincarnate it was my Uncle Ray. He talked incessantly about the wagon trains that gathered to head west, even at my very young age he would insist I sit and watch the television series Death Valley Days with him. Most of them gave me nightmares over the struggles people endured but he would insist I watch it while he would go on and on about the adventures of the settling of the west. He would take me along on his walks through the woods and he’d point out the mounds of earth and he would say “if we dug there we would find arrow heads and other things but we won’t disturb it because it’s an old Indian grave.” He knew where all the Indian graves were. You could often find him wandering along the banks of the Merrimac River exploring what he called old native campsites. He would take his boat out and tend the wild rice patches that most people didn’t even know existed.
I was told he was instrumental in cleaning up the river as well as planting black walnut trees that were almost extinct but native to the town forest. I thought he was like Johnny Appleseed who wandered the countryside spreading apple seeds. When the blueberries were ripe and ready for picking we would wander to his favorite places where the blueberries, wild blueberries, hung from the bushes like grapes. We had to make a lot of noise to scare away the bears that might not want us stealing their blueberries. We filled buckets of berries. When we got back my grandmother would turn them into blueberry slump.
It is days like this when I can smell the corn roasting and imagine the lobster pot boiling away… fresh vegetables from the garden tossed into a salad and the whole family gathered together. It was a simpler time… a slower time… a quieter and it seems now a more peace full time. When night fall would come I would lie on the grass and listen to wonderful stories of how the stars and planets came to be. Hunting stories—stories of the hunting camps all the while waiting for just the right moment when the Northern lights, aurora borealis, flashed a rainbow of colors high in the night sky.
Maybe it was just the magic of hot blueberry slump with vanilla ice cream. Blueberry slump made from scratch…. We would gather together and wash and clean fresh picked blueberries… no less than a quart and 2 quarts and even more is better. Place in a large pan, which has a tight fitting lid, and cover with water and if you like add a couple of spoons of sugar. When it comes to a rolling boil lower the heat to a simmer and then drop spoonfuls yellow cake batter like dumplings into the blueberry mix. Cover tightly and let gently simmer for 15 or 20 minutes. No peeking into the pan until it’s done.
Nanny’s yellow cake mix: cream together 1/3 cup butter, ½ cup sugar then add 1 egg and some vanilla. Mix ¾ cup flour and ¼ teaspoon of baking powder. Combine all together using ½ cup of milk.
I can smell it cooking even now… No summer is complete without lobster and blueberry slump.
Posted by Brenda at 4:35 AM No comments: