The Mystical Nature of Trees 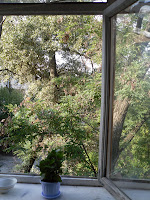 I have been thinking a lot about trees lately and my relationship to them. As I sit here looking out into the top of a very large tree, almost close enough to touch, I can sense a connection. It is as if I can understand the language of trees—as if I can hear them whispering. I know that probably sounds a little strange so I will attempt to make things a bit more clear or understandable to the human ear. Every since I was a child I have loved trees. I climbed them, sat under them, hugged them, leaned against them, cried to them and studied the many colors I can discover in the bark. They seem to me to be living breathing creatures. When my children were young I taught them to climb trees… to sit among their branches, to listen to the wind rustle through the leaves and on a cold winter’s night to hear the cracking and popping as they expand in the freezing temperatures.

One of my favorite trees is the birch tree with its shinny white bark glowing in the moonlight. My grandmother use to tell me stories of how when as a child she would ride the birch trees. She said they were bigger and taller then and the snow was much much deeper. She explained that the birch tree is so flexible that when it snowed and the snow lay heavily upon its branches, the tree bent over and touched the ground. My grandmother and her siblings and friends would grab hold of the top of the tree… shake off the snow and then they would hang on so tight as the tree would very slowly lift them off the ground and drop them to the other side. I was never brave enough to attempt to ride the birches in the wintertime.

My uncle Ray often explained how the native people would peel the bark and use it for their paper, and prayer baskets, pouches and carrying bags. Out of the wood they created the finest canoes. He said one needed to be very careful about removing the bark because there was only a special time of the year when peeling the bark would not kill the tree. He said the birch tree was also considered the “way shower” because the white bark shined and glistened in the moonlight lighting the way. In Lapland and Siberia it’s called Sky ladder. During trance the shamans would imagine themselves climbing the birch tree to enter the sky world. When my children were growing up I taught them to climb trees there is nothing better than to sit among the branches of a huge tree. There was always a tree nearby with branches just right for climbing.


There are many folk tales about trees and one I heard some time ago is about a daughter who married and moved far from her family to a distant village to live with her husband and his family. The young woman was very unhappy there and when her mother came to visit her daughter she saw how unhappy her daughter was. This made the mother very concerned so she suggested to her daughter that they go for a walk in the forest. They walked for some time talking about the daughter’s troubles. Eventually they stopped and rested in the shade of an ancient weeping willow tree. The mother said to her daughter, I cannot be here all the time to help you with your unhappiness… but this tree has seen many people pass this way and so weeps with understanding for the troubles of humans. I want you to come once a week to this tree and to lean your head upon the tree and tell the tree all of your sadness. She said to her daughter I want you to give the tree your tears. The daughter agreed to this and every week as her mother requested she visited the tree. 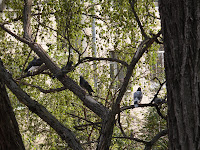 For the next year every week the daughter returned to the tree to lean against the bark and to cry her unhappiness. After the year passed the mother returned to visit her daughter. She said, “Daughter, you look so wonderful.” The daughter told her that as she spoke to the tree she began to change and as she changed her life changed and she began to see things differently. The mother suggested they walk into the forest and visit the tree to offer their thanks to the tree. Eventually they came to the tree but the tree was crumbling and decaying. They knew that the tree had absorbed all the pain and sorrow that the daughter left behind. The daughter and the mother were sad for the tree but thankful for the daughter’s new life. As they began to leave the mother said, “Look.” A branch had fallen from the tree and from the decaying branch sprung new life. They then understood that as the daughter grew in her new life the tree also put forth new life. As her mother was leaving she made her daughter promise to visit the old dying tree and to share her gratefulness with the new life that sprung from it.

I remember a time when I was visiting a friend in Virginia. I was going through a difficult time and needed to take a break so I could decide what to do. My friend lived on the river in the watershed area of Virginia. She and her husband had a beautiful home and the window by the bed in the room that I stayed looked out on a very large beautiful tree. I don’t remember what kind of a tree it was but when I laid down I could see this tree just outside the window. The night before I was to leave I laid there looking out at the tree still having no idea what I was going to do when I got home… As I stared at this magnificent tree I heard these words, “You will know exactly what to do.” A peaceful calm fell over me and I drifted to sleep. When I arrived home the next day I did know exactly what I was going to do… an answer presented itself, the situation had been resolved and I moved easily into the next phase of my life. 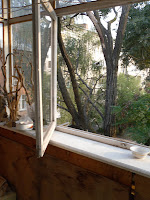 Recently I have had another struggle. As a volunteer in a foreign country I found myself without a place to live. I moved 6 times in 5 weeks. Strange and unusual situations were behind every move and I had one foot out the door in the direction of the airport. As a last resort I was shown a small one room flat with a balcony that looked out at the tops of trees. Confused by my situation, homesick, for my daughters and family I couldn’t decide what to do. Over the next week all I could think about were those trees. The image of those trees appeared to be calling to me. When I would see those trees in my mind’s eye I would feel safe. I was waiting for sign to leave instead I was given a sign of peace and safety among the trees. Even as I type this, doves are resting on the branches so close I can almost touch them. I feel like I am living in a tree house. So I remain here among the birds and trees and wait for the next sign post, the next cairn, to guide me on my way. I am still missing home and family and friends. My dean, friend and mentor from the seminary, said “fish, cut bait and go home.” I am still fishing and when I have reached the place where I am given the sign to leave I will cut bait and go home. In the meantime I will watch the change of seasons reflected in the branches of these stately old trees.