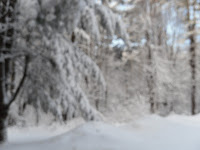 How to make Something out of Nothing...

It was so depressing the other day… here it is March and we were getting a white out kind of snow day.  I am glad that it's going to be a good maple sugaring season, with warm days and cold nights but I am so ready for spring and flowers and the color green.  There I was cold and hungry with my sweet tooth kicking in and I was determined not to go to the store.    Now I love to cook and can make almost anything out of nothing... but through the years I have learned that one must have something to make nothing out of and my cupboard was bare.  Going over snowy icy roads fifteen miles to the nearest store was not something I wanted to do. 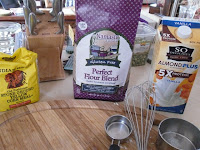 I had some cornmeal so I thought could make some cornbread.  I had gluten free flour, a little sugar, one egg but no milk.  I thought for a moment and then decided I could try to make cornbread with water.  Since I haven’t done much baking with gluten free flour I wasn't sure how it would turn out even if I had milk.  I decided I needed to practice anyway and since no one in the house eats gluten anymore that is all the flour I had on hand. 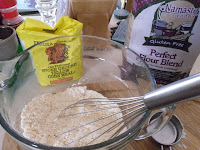 I took one cup of cornmeal and wire whipped it together with one cup of gluten free flour, one quarter cup of organic sugar, a pinch and a half of salt, quarter teaspoon of baking soda and one heaping teaspoon of baking powder.  Then I whipped one egg into one third of a cup of oil (half melted butter and half olive oil.)  Looking at these two bowls, one containing the oil and egg and the other containing the flour mixture, I decided to think about this before going any further.  I just couldn’t imagine mixing all this together with water. I rubbed some butter on the inside of a blue baking dish.  Grabbed the gluten free flour and dusted the dish while making my decision to use vanilla flavored almond milk instead of water. 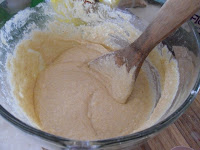 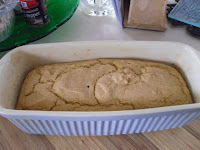 I poured the oil and egg mixture into the flour mixture and then added two thirds of a cup of almond milk.  Mixed it all together with a wooden spoon and poured it out into the ready and waiting baking dish.  Next I popped it into the oven and baked it at 350 degrees until the edges appeared done, cracked slightly in the middle, and the toothpick came out clean.  I guess it was about 40 minutes… I am not good at keeping track of time. 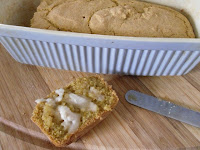 So it was, much to my surprise, that I made the best gluten free cornbread ever.  Being so amazed at the results that I made a second loaf just to be sure that it wasn’t a fluke.  It wasn't-- it was wonderful—light moist and so good with a cup of hot organic masala chai to which I added an extra dash of cloves, ginger, cinnamon, and nutmeg and a little bit  of organic almond milk.  Topping all that off with a Netflix movie and I was all set. 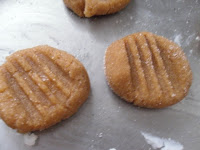 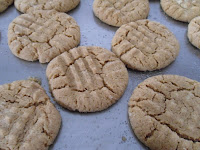 Peanut butter cookies?... Recipe to make the best peanut butter cookies in the world.  One cup of sugar mixed with one cup of peanut butter and then add one egg and one teaspoon of baking soda, mix it all together… let the mixture sit for a moment or two then form into small balls, roll the little walnut sized balls in sugar, place onto a lightly greased baking sheet (I use coconut oil), press down with a fork and cook for about 10 minutes…. leave on the baking sheet until cool and then eat as many as you can before anyone else finds them… yum... tiny healthy (well, sort of healthy) morsels to have with a cup of spiced peppermint tea!

Posted by Brenda at 1:10 PM No comments: