"Frugality is one of the most beautiful and joyful words
in the English language, and yet one that we are culturally
cut off from understanding and enjoying. The consumption
society has made us feel that happiness lies in having things,
and has failed to teach us the happiness of not having things."
~Elise Boulding, Norwegian-born American Quaker sociologist and author.


I found this as I was reading a small book, Wabi Sabi- The Art of Everyday Life,  given to me by the daughter of a woman I visited as a hospice chaplain and provided the funeral service for the family.  I felt that it fit with the place I am in my life right now today.  Over the past few months I have been decluttering, separating what has sentimental value from what is really simple and beautiful.  Right now I want simple and beautiful--it's my journey to becoming a minimalist.

So, I have lovely things that I have acquired over the years and decided to put on them on Etsy.  It's time for these items to find another home where they will be treasured.  The first one I decided to  show on Etsy was a bracelet signed stamped by Navajo silversmith/lapidarist, Carol Kee.  She is known for her depiction of Disney characters in her jewelry.  I acquired this Jiminy Cricket bracelet when I owned a shop in Florida on Amelia Island. It was more like a gallery of traditional Native American art and rare and unusual beads and findings.  I was told by a Navajo silversmith, who often visited the shop to display his work and technique, that she was actually given permission by Walt Disney to recreate his characters.  I couldn't part with so tucked it away. 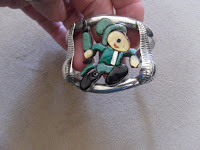 Sadly, Carol Kee crossed over several years ago.  This Jiminy Cricket bracelet is probably one of her earliest works, a very rare collector's piece and may be the only one of it's kind, and most likely created in the late fifties or early sixties. Walt Disney died December 15, 1966.  The bracelet is sterling silver with mother of pearl, jet, turquoise and coral.

Now on my journey to becoming a minimalist -- its time for someone else to enjoy it.
You can see it on Etsy here

Here is a treat for you... a trip down memory lane... "Give a little whistle"  Enjoy